We spent our last official day at Semuc hiking with a new group of friends. One was named Colin from the UK, two named Jesse and Isaiah  from Kentucky, and a guy named Cherry from Arizona. We left with the intention of finding two bridges near Utopia. Our hike began following a small trail next to the river. After about half an hour in, our trail was pretty much gone and we were pretty much blazing our own. It was hot and humid with a lot of bugs and overgrown plants. After about an hours hike, we finally made it to the first bridge. By bridge, I mean that it servers its purpose by connecting two pieces of land. However, I don’t think it would have been allowed to be used under any circumstances in the U.S. It was missing boards and it swung back and forth. It was a scary thing to cross. I was more than a little nervous the whole time. We decided to space ourselves out after a while to miminize the swinging, and after we made it to the other side, we were greeted by a whole bunch of kids who were playing soccer and others watching. 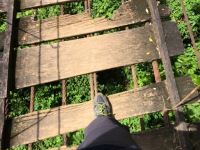 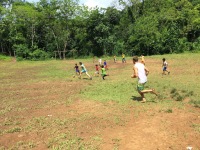 Alisa and the others decided to join them for a soccer match while I stayed off to the side and watched all of our gear. Everyone looked liked they were having a lot of fun, but it was apparent that the kids were more accustomed to the heat. After a while, our guys started wearing down. I sat with Cherry and we talked a long time about home and what our plans were for the future while the others played. When the game was over, Alisa looked like she was really happy she got a chance to run around for a bit, but everyone looked exhausted by the heat. A lot of the kids asked us for water and Isaiah gladly gave some of his water but cut off the valve to his camel pack because at the rate they were going, they were about to finish it off. 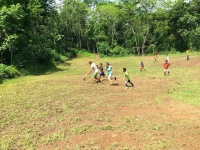 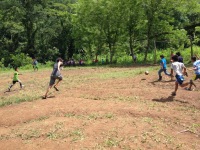 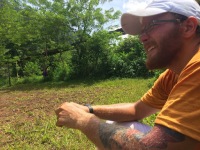 When we crossed the bridge back, it was even scarier. All the kids decided to follow us back over the bridge at the same time. It was swerving a lot more and it felt a lot more unstable to me. I walked as fast as I could and as i looked back I saw Alisa walking with a crowd of kids following behind her. 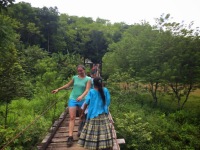 We returned back to the hotel and had some lunch before we would walk back to Semuc Champey. We met up with two girls from the Uk who decided to join us on the 40 minute hike. During the walk, it started raining and we were worried that we would not have the right weather for a swim. However, as it turns out, the rain here in the forrest doesn’t last very long. It rained for about 45 minutes and then it was sunny for the rest of the day. 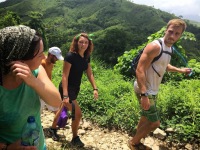 We arrived at the pool and after storing our gear in one of the foot lockers. We were swimming and jumping off cliffs for the rest of the day. We timed our jumps together, took turns diving off things, and stood around as minos bit our legs. It was really fun. I really can’t put into words how amazing Semuc is. It´s really something that has to be seen to really understand it´s beauty. We were really fortunate to meet up with so many fun people during this part of the trip.

After swimming, we decided to do another round of tubing. We all enjoyed a nice reaxing one hour tube ride back to the hotel. When we got to the hotel, we had our last meal with our group and shared a lot of laughs and also discussed our plans for the remainder of our trips. Alisa and I headed to bed around 10:30 and awoke around 5:45 the next day in order to catch our eight hour shuttle back to Antigua.

We are now in Antigua and on the cusp of our next trip to Monterrico which is on the coast. Im not really ready for another shuttle ride, but this one is not as long as the others so it shouldn’t be as bad. We might take some spanish classes while we are there or just take in some sights. Just like all the other places we haves visited so far, we don’t really have a plan.

Update: We just arrived in Monterrico where we will spend the next five days. We are going to take some spanish classes while we are here and some smaller tours around the area. I hope to do another blog update soon, but internet here is really limited. In fact, we have to be careful on how much we use because the downloads here are extremely limited. If I can’t post, I will do a bigger one at the end of the week.