Skip to content
We woke up this morning around 3:30am. There were two reasons why it was really hard to get out of bed. The first, both of us couldn’t sleep the evening before and, second, when we finally did fall a sleep, someone kept ringing on the door bell over and over around midnight. After getting all our things ready, the owner of the hostel was already up and asked if we were ready to head out. She said that it was going to cost Q40 to give us a ride to the Airport. I opened the email and checked my receipt. It stated that the shuttle to the airport was included with the price of the hostel. I wasn’t in the mood to argue with her and she didn’t look like she was in the mood for a discussion. I paid the Q40.
Our shuttle ended up being her 1982 Toyota Corolla. Since I had to pay for the ride to the airport, I decided I would get my money’s worth and sit in the front seat. It was about a two minute ride and worth every penny. There is no way on earth we would have walked through Guatemala city with our packs, computers, and other things. When we arrived at the airport, she gave us each a hug and a kiss on the cheek and told us to have a good trip. It was like saying goodbye to my grandma… Kind of…

The international part of the airport in Guatemala City is really nice; it’s almost as nice as the one in Portland. We checked our bags, filled out our forms, walked through security and we were in the terminal quickly. We still had some Quetzales left, so we decided to stop at a coffee shop and get a few cups before our flight. The flight was really uneventful. Aside from the fact that everything had to be bilingual, it could have been a flight in the USA. 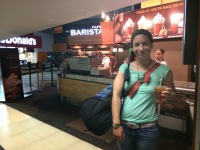 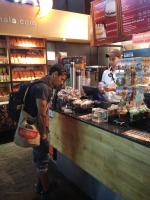 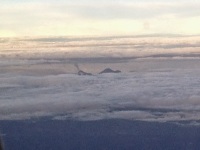 The trip got a lot more interesting when we arrived in Houston International. We got off the plane and were directed to the customs agency. I didn’t know this before, but they have different sections for foreigners and citizens. Anyway, Alisa and I walked up to an automated machine in the citizen section where we had to scan our passport, answer a few questions, and have our pictures taken. Alisa’s went through just fine, but I, on the other hand, was flagged. There was a big black X on my ticket that said I needed to report to an agent. So like a good U.S. citizen, I did just that. When we got up the the window, there was a women, who was not interested in small talk, who began asking me questions. What’s your relationship with this woman? “uhh, she’s my wife” Why did you go to Guatemala? “uhh, vacation” Where do you work? “I am currently unemployed” You don’t have a job? “Thats right…well I quit my job…actually we both quit our jobs so we could travel” (we were given an unimpressed look by the agent). If you don’t work, how did you pay for your trip? “err, we saved money for a year” Do you have any edible items on you? “We have chocolate”  What‘s your date of birth? … Ok you can come on in. And that was the end of the conversation. I came to the conclusion that because of my sweet new tan, I no longer look like the picture on my passport and their Hispanic Detector Algorithm™ picked up on that. I’m still kind of confused why the Hispanic Detector Algorithm™ didn’t pick up Alisa’s tan. Oh well.
The rest of our trip was really uneventful. We had two stops, one in Housten and another in Denver. We had about 13 hours of total travel time: eight hours flying, a one hour max ride, and the layover time. When we arrived in Portland, we gathered our things, headed toward the Max and took the train back. We were greeted at the Beaverton Transit Center by Alisa’s dad who gave us a ride back to the house. We were greeted by Alisa’s mother, Sam, and Caleb. When we got here, there was a fire going in the in the pit just as it was when we left. So here we are; our trip has gone full circle. It’s a beautiful day here in Portland Oregon and we’re glad we’re back. If you have read this blog through-out our trip, thanks a lot. I hope you really enjoyed reading about our trip, and Alisa and I are really glad that you came with us. From both of us, take care and God bless.

Oh yea, before I forget. Before we were reunited with our cat Turtle, we were told that he needed to be quarantined  because he would not stop eating the other cat’s food. When we did finally see him, we agreed that it was for his own good. He’s pretty thick now and like his owners, needs to go on a diet. 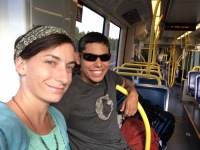 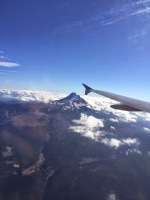 We couldn’t travel as normal this year but we have beautiful landscapes (seascapes?) nearby
We’re adding to our family...
#luchalibre in #guadalajara
Antigua, Guatemala 2014 #guatemala🇬🇹 #antigua
For now...
Two old cats hanging out... #idratherbeinmexico #coronavirus