***Warning! There are some graphic photos of butchered Animales in this post. If you are sensitive to these types images please use your best judgement***

Remember: If you ever travel to Latin America you will see meat presented this way in a local market.

The past several days have been a whirlwind. On Sunday we headed to a small suburb of Lima to meet up with the Lima Assembly. It was really fun to meet a whole bunch of people from the same church but from so far away. It was really interesting that much of the format is the same. Some of the songs I recognized, I think, but the tunes were a little different, so it was hard to be sure. The thing is, when a song is translated to a different language often times they change some of the verses so that the timing will be maintained.

At the end of the meeting we met a young woman named Michelle. She was excited to hangout with us because it gave her a chance to practice her English. Her English was good. I think I remember her saying that she does not have a lot of opportunities to practice it with native speakers. Believe me, she took advantage of the opportunity. 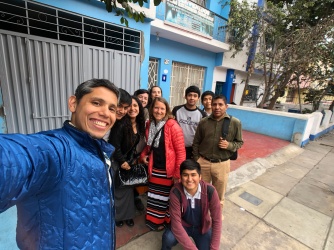 Her Mother invited us over to their place for lunch where we were treated to fried chicken and rice. It was fun, and we got a chance to visit their house and ask them a lot of questions about life here in Peru.

Afterwards, we headed back to Miraflores where we bought some ice cream and walked close to the beach. We had a chance to see the famous outdoor mall Larcomar and the beautiful coastline. It’s winter here, so everybody was bundled up—even the dogs. I know it’s perspective, but it’s kind of funny when its about 55 degrees outside and people look like they are walking around in 35 degree weather. 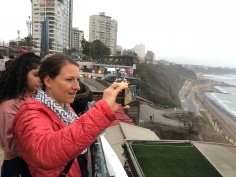 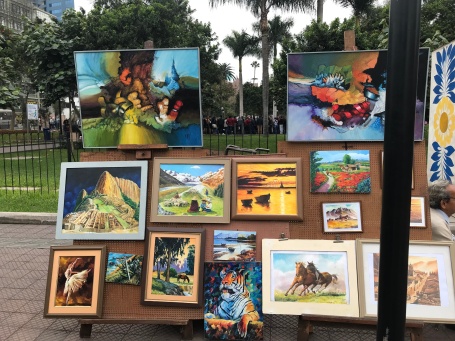 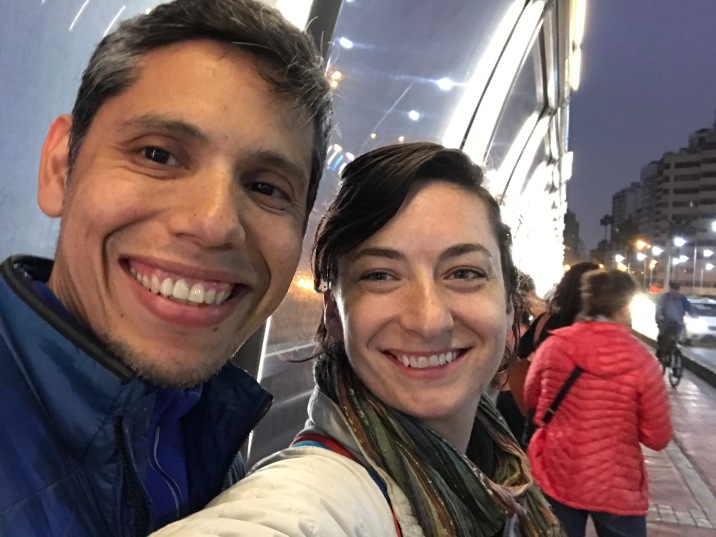 After walking around for about an hour, Michelle’s father Ronalto picked us up, and we headed to a park called Parque de la Reserva where they have several amazing fountains and overnight they put on a laser light show on one of the bigger fountains. We also got to walk through a corridor fountain that got us a little wet. This is where I realized that my jacket is not water proof. 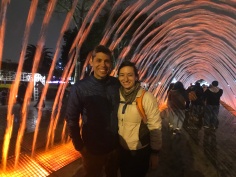 Up to this point, we have avoided going to chain restaurants here in Peru. However, Ronalto wanted to take us out to eat. He drove us to a place called Rocky’s which we have seen all over town. We have not gone there because it looks a lot like a Chili’s and Alisa and I never eat at places like that. However this place was amazing. We had pollo a la braza (rotisserie chicken) which sounds odd because it is something we have in the U.S. however here in Peru they take it seriously. It was amazing. I had never tasted chicken like that. The spices were awesome. We also ate anticuchos which is cut up beef heart cooked on a stick. It was really tough but again, the flavors were awesome.

At the end of the meal we were invited over for lunch the next day where we were told we would have a special treat of Cuy or guinea pig. They dropped us off at our apartment around 11:30 in the evening.

The next morning we were all up around 9-10ish. We needed to pack our things so we could check out. We also had a flight to Cusco to catch at 5:30. We were out of the apartment around 11:30 in the morning and quickly found a taxi to take us back to Michelle’s house. When we arrived, we were told that the Cuy was still cooking so we were offered a tour through a market close by. I had a pretty good idea of what would be in the market, but it had been about three years since I had personally been to one. The last one was in Guatemala. When we arrived at the market, it was very similar. In the U.S. we are used to everything being presented a certain way. For example, we really like meat, but we don’t like to see all the pieces of the cow. Here, however, it is a completely different story. Every possible part of the cow, chicken, and whatever other animal are displayed for the world to see. It’s very similar to an anatomy class where your job is to separate each piece so you can categorize it and display it to the class. Check out the photos. 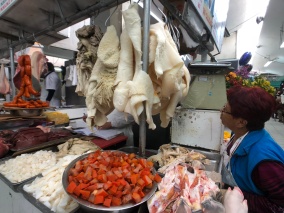 This was a good way to prepare us for lunch…I think. When we returned to their house we were each given a plate of rice, vegetables, and a cut of meat which looked very similar to chicken. It was Cuy. It was not bad but not great. To be honest it was very greasy and there was not a lot of meat on the bones. It reminded me of rabbit, but knowing that it is normally a pet in the U.S. was a little off putting to me. I ate as much as I could, but I could not finish the whole thing. Alynn seemed to enjoy it, so I offered her my piece which she promptly finished. She mentioned that it tasted good, but it is not something that she would try again. After lunch we were treated to a sample of Pisco which is a very popular alcohol here in Peru. It tasted good; it reminded me of Tequila and is probably just as dangerous.

Warning! The following video shows a dead guine pig before it is prepared. This is a typical meat eaten in Peru, please be respectful of their culture.

After lunch we thanked the Sueros family and got in our taxi to head to the airport. I was a little sad to be leaving Lima. We had a great time and there was a lot more to see, but we were on a schedule. We had to head to Cusco so we could get used to the altitude before starting our hike to Macchu Picchu. We were fortunate to find plane ticket for less than 70 dollars a person and the flight took about an hour. I was glad because I had no desire to take a 10 hour bus ride across Peru.

We’re adding to our family...
#luchalibre in #guadalajara
Antigua, Guatemala 2014 #guatemala🇬🇹 #antigua
For now...
Two old cats hanging out... #idratherbeinmexico #coronavirus
I was given this by my students at #portlandstateuniversity ...it may or may not be a threat...