I woke up at 3 a.m. on the dot. I let Alisa sleep a few more minutes while I got my day pack organized. Once I got everything together, I tried to wake her up, but she sounded really sick. It was obvious to me that the best thing for her would be to stay at the apartment and rest up because our hike to Machu Picchu started the following day. She was pretty bummed.

The bus arrived at exactly 3:30 in the morning. The driver Tío Miguel, called my phone and said that he was having trouble finding us. Alynn and I walked out the front door and saw a van in the distance down a dark dark narrow street about 50 yards or so. We were greeted by Tío Miguel and apologized for our apartment being so difficult to find.

I have done several trips like this in the past. What happens is that a van drives around and picks up a whole bunch of strangers. Everyone is quiet for a long time and then after a while, we are all friends. More than friends, we are all friends from different parts of the globe. If you have never traveled to Latin America, this is one of the main reasons for doing it.

The drive down was really nice. I listened to a few podcasts and slept off and on. We stopped at a small town just outside of Cusipata (4,326 m / 14,189 ft.) where we enjoyed a complementary breakfast made up of chicken soup and sweet bread. Also, we were all given coca leaves to put in some hot water to drink. If we wanted to chew them, that was an option too. I purchased some pills at a local pharmacy to deal with the symptoms of altitude sickness (In the U.S. you need a prescription. Here you do not) and took one with my breakfast. We were given about 20 minutes to finish our meal which was just a simple soup with some bread. The soup reminded me of a chicken soup, however, instead of noodles there was quinoa. It was really tasty and simple, but it reminded me more of a light lunch than breakfast. After eating for about 20 minutes, we were promptly loaded back onto the bus. From the small town the trail head was about an hour and a half ; I made use of the time by taking another nap.

When we got to the trail head, we were each given a small red flag to tie to our packs so that the guides could keep track of us. We were each given walking sticks to help us up the trail. The entire path was going to be uphill, so i appreciated the gesture. Once we started walking, I could tell that this was not going to be easy. It was really hard to breath. I tried to record a entry to our vlog, and I had to pause several times in order to relax and catch my breath. The trek up the mountain overall was not too difficult except for the lack of oxygen. Thankfully, I don’t suffer from asthma, and I can usually do a hike with a steep climb without too much trouble. After this trek, I can really sympathize with those who do suffer from it. It is horrible to be taking deep breaths, but you can not get anything into your lungs. Even walking at a normal to slow pace and talking to someone next to you can give you a lot of trouble. It was really amazing and something that I had never experienced before. It took us about an hour to make our way to the summit. During the walk, I got a chance to talk with the tour guide for some time. He told me that people in the area have to go to college and specialize in tourism in order to work as guides. He also mentioned that he really needs to improve his English because that can open up a lot of opportunities in his field. 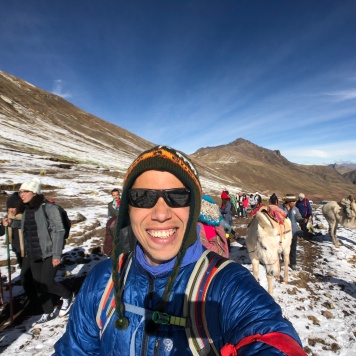 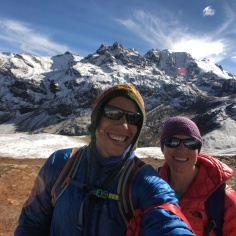 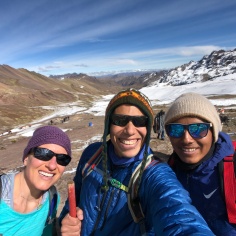 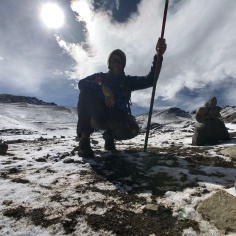 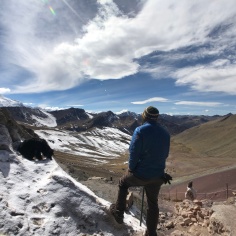 When we made it to the summit, it was breathtaking. I still cant even believe how beautiful being at 14,000ft above sea level. We were able to stay at the top for about 45 minutes where we talked with other tourists and got the chance to make a new dog friend along the way. I really enjoyed the time up at the top. Our guide told us about the history of the mountain and the types of sacrifices the Inkas made when the summited. Many of those sacrifices often included children. He pointed to different mount summits and told us that most of them still had mummies inside them, but it would cost too much to remove them. 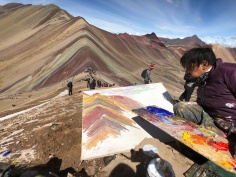 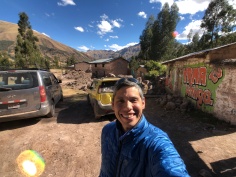 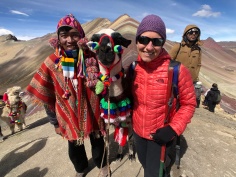 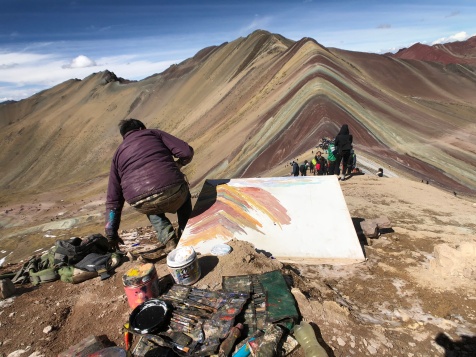 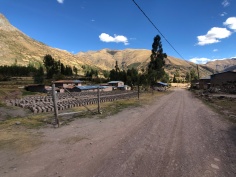 The trek down was super easy. We made it back in about 45 minutes. After loading everyone into the truck, we returned to the restaurant where we had started before. We were each given a soup that resembled the one we had that morning. After finishing it, we were surprised with an all-you-can-eat buffet. Which consisted of a lot of Chinese food options, lama stew, steak stew, a curry chicken, rice and much more. The restaurant was very simple. I don’t think the building itself had a restroom or sink. I asked if there was a place where I could wash my hands and I had to go around the building and through a gate until I found an outhouse. We made it back to Cusco around 4 in the afternoon where we picked up Alisa and headed to Alpaca Expeditions where we had our first orientation.

Washing my hands before lunch

It was that evening where we met our tour guide José for the first time. He seemed like a really serious person and gave us a lot of valuable information about the trip such as what we needed to pack, where we could leave our luggage, medications to bring, and much more. He didn’t hold any punches. He told us that the hike was going to be tough but doable. We would be heading up and down in elevation several times in one day and that could cause altitude sickness. He also mentioned that there were 12 of us in all that were going on the trek and that we would be accompanied by two guides and 16-18 porters that would carry the tents, bags, kitchen, food, portable restroom, and a lot more. We were each given a small green duffel bag with which we were able to fill with 5 kilos or about 11 pounds. That sounds like a lot of weight, right? Actually we had less than 5 kilos because our sleeping bag and sleeping pads would be factored into that total weight. That meant that we would only have about 3 kilos to store our personal belongings, change of clothes, and toiletries. He gave each of us a small scale to take with us back to our apartment in order to weigh our gear. José said that the government has regulations on how much the porters can carry, and will fine the business and the porter of they are caring over the maximum amount. As a result, it was extremely important that we were all within the appropriate weight.

Once we returned to the apartment, it was already dark and late. I had a really hard time deciding what to take and what to leave. Six pounds is not a lot of weight. Especially if you want to change your underwear everyday (TMI…I know). I decided that I would focus on having fresh socks and boxers along with toothpaste and other personal hygienic items and resort to only wearing one pair of pants the entire hike. I also packed a really light pair of running pants to sleep in at night. It weighed in right at six pounds, and I went to bed.

We couldn’t travel as normal this year but we have beautiful landscapes (seascapes?) nearby
We’re adding to our family...
#luchalibre in #guadalajara
Antigua, Guatemala 2014 #guatemala🇬🇹 #antigua
For now...
Two old cats hanging out... #idratherbeinmexico #coronavirus